Lamezia Terme, 16 September, in the evening.

Field trip cost is 530 €/pp, including accommodation (four nigths) and meals (except for dinner last day), transportation in minibus, and a printed fieldtrip guide.

Central Calabria is one of the rare places in the world where a nearly complete cross section of continental crust is exposed with continuity, from metagabbros equilibrated at a depth of c. 35 km, through felsic granulites and metapelitic migmatites, to upper crustal paragneisses and phyllites. The crustal section also includes the late Variscan Serre Batholith (c. 297-292 Ma), a c. 13 km-thick composite and zoned batholith, consisting of a stack of tabular granitoid units, from strongly deformed to apparently undeformed and ranging in composition from quartz diorite-tonalite to syenogranite, which were emplaced sequentially, at depths from about 23 to 6 km.

In this field trip we will be exploring the entire crustal section from bottom to top, with a central focus on the role of granitoid magmatism in the growth and evolution of the continental crust in collisional zones, together with a number of more specific topics related to the large variety of rock structures and compositions.

Welcome dinner at the hotel in Lamezia Terme

9.00 : Introduction to the geology of central Calabria.

We will start our field trip from the deepest part of the exposed crustal section, at Turrina Quarry near Curinga, where metagabbros of debated protolith age and origin, equilibrated at a depth of c. 35 km, crop out. Metagabbros are part of a Mafic Granulite Complex, c. 3 km thick, mainly composed by mafic granulites with minor occurrences of felsic granulites. The next stop will be at one of the better preserved outcrops of these felsic granulites. We will then move upward, to the overlying Migmatite Metapelite Complex, c. 4 km thick, visiting a typical migmatite outcrop from the the top of the lower crustal sequence.  Between stops 2 and 3 there will be a visit of the Pizzo Castle (XIV century), a small fortress where, in 1815, was imprisoned and then executed Joachim Murat, king of Naples and Napoleon’s brother-in-law. 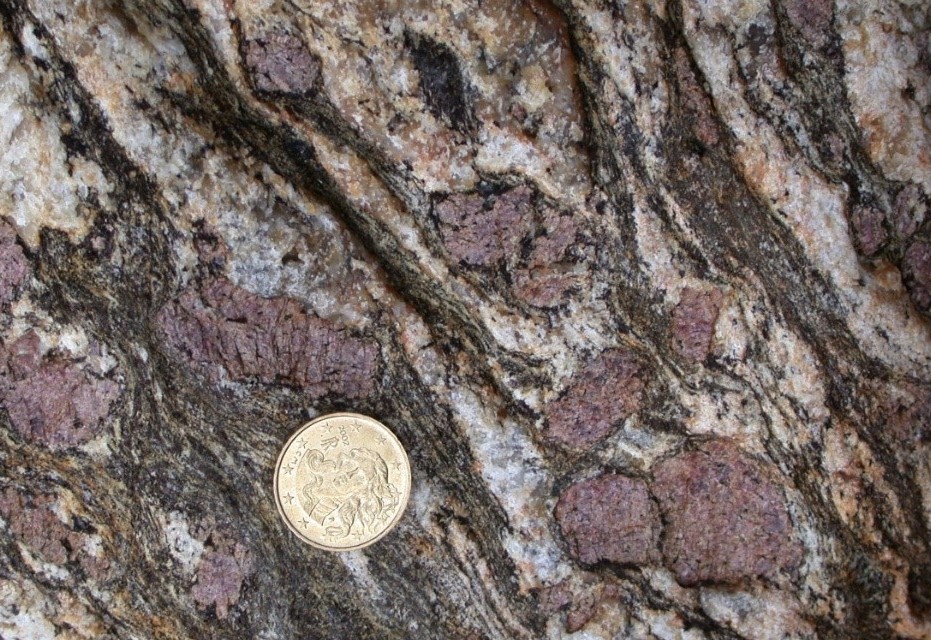 Metapelitic migmatites from the top of the lower crust

Topic : From the top of the lower crust to the deepest granitoids of the Serre Batholith

The first stop will be at the cobble-boulder beach of Santa Maria, where each cobble/boulder is a 3D record of the interaction between syn-tectonic quartz diorites-tonalites (c. 297 Ma) making up the floor of the batholith, and the underlying metapelitic migmatites. Emplacement of the granitoid magma triggered indeed further melting in the migmatites, producing peritectic garnet up c. 5 cm large and anatectic melt variably interacting with the tonalites. Garnet is particularly outstanding in this outcrop, also forming peculiar leuco-quartz diorites. We will walk to a cliff where the quartz diorites-tonalites crop out and display a variety of textures and compositions related to the interaction with the anatectic magma. MME of quartz dioritic-quartz monzodioritic composition locally occur. The second stop of the morning will be at a slighly higher structural level of the granitoid unit, still made up of syn-tectonic tonalites, with swarms of stretched MME and locally cut by pegmatite dykes. The third stop, in the afternoon, will be at the Michelino Beach (Parghelia), where it is possible to observe striking mush-magma relationships between the tonalites and the overlying two-mica porphyritic granodiorites and granites (c. 296-295 Ma), which are the dominant rocks in the beach. The porphyritic granitoids contain K-feldspar megacrysts up to 12 cm-long, locally showing flow and/or accumulation textures.

The third day will be partly devoted to the tight connections of the granitoids and other local rocks with the architecture, productive activities and popular myths across central Calabria. The first stop will be at the Zungri Caves, still in the Capo Vaticano Promontory, a rock settlement dating to the 8th-12th century. Then we will head to the Serre Massif, whose geology, in the areas far from the Ionian coast is largely hidden by forests.  We will visit Serra San Bruno, a medieval « granite town » (c. 1100 a.C), where most of the urban furniture, sidewalks and buildings are made of granite. The local granite consists of the same porphyritic granodiorites and granites of Capo Vaticano Promontory, here close to the transition to the overlying unit, made of two-mica equigranular granodiorites and granites (c. 294 Ma). The next stop will be at the « Megaliths of Nardodipace », masses of jointed and broken blocks of the above-mentioned two-mica equigranular granitoids emerging from the bedrock up to c. 8 meters. In the last 20 years these structures have aroused large interest in Calabria and locally reported as human artifacts, erected by ancient populations, such as the Laestrygones from the Greek mythology. The last stop of the day will be a few km southward, but at the fourth, shallowest and youngest (c. 292 Ma) main granitoid unit of the batholith, consisting in weakly peraluminous equigranular granodiorites, with common occurrences of MME, typically of quartz-monzodioritic composition.

The first stop will be In the Stilo area, where we will observe a portion of the batholith contact aureole, here consisting in spotted schists with porphyroblasts of biotite, andalusite and cordierite.  We will then visit a small stone processing company, where the worked granite stones are not from typical quarries, but are instead the « Granitic stones of the Stilaro Valley », i.e., cobbles and boulders of alluvial origin. Then, we will visit two outcrops documenting the final Permo-Carboniferous magmatic stages in Calabria, which produced  swarms of pegmatite-aplite dykes, followed by medium- to high-K calcalkaline andesitic to dacitic-rhyodacitic dykes. At some locations, the leucogranitic dykes cut a well developed mylonitic foliation in the Mammola paragneisses, i.e., the upper crustal host rocks of the batholith togheter with the tectonically juxtaposed Stilo phyllites.  The final stop of the field trip will take us back again deep in the crust at the transition from the lower crustal migmatites and the syntectonic tonalites from the floor of the batholith, at Palmi. Here the Variscan metamorphic and magmatic rocks have been spectacularly deformed within a regional-scale Alpine shear zone (Palmi Line), associated with the tectonic juxtaposition of the Serre crustal section with the poly-orogenic (Cadomian-Variscan-Alpine) basement of the Aspromonte Massif, to the south.

The field trip will end in Reggio Calabria around 6 p.m. Dinner and overnight in Reggio Calabria are to be organised individually, but the organizers will be happy to help if needed. Reggio’s promenade is often referred to as “Italy’s most beautiful kilometer” and the city hosts, at the National Museum of Magna Grecia, the stunning “Bronzi di Riace”, which are definitely worth a visit.

To be arranged individually. Participants can reach Lamezia Terme by train from Milano Central Station, or (better) by plane from Milano Malpensa. The meeting point will be at the selected hotel in Lamezia Terme in the evening of September 16th. A shuttle service from Lamezia train station/airport to the hotel will be offered to all participants.  The field trip will end in Reggio Calabria (downtown/train station).  Participants who do not want to stay overnight in Reggio Calabria can take a night train to Rome. Night flights from Reggio Calabria airport might become available in the next weeks (the full summer program is not available yet), while morning and  afternoon flights to different destinations will be certainly available the day after.

Accommodation in double rooms. Single rooms can be available on request, at an additional cost.

Most outcrops are on the beach (remember to bring your swimsuit!), along roadsides and riverbeds; only short walks in rough terrains are planned, but solid field boots are anyway recommended. The equipment should also include sun protection and sun hat. The weather in mid-late September is usually warm and dry in Calabria, but some warm clothes and a waterproof jacket are also recommended.